Dancing On Ice 2023: Joey Essex and Vanessa Bauer open the new series with an impressive 27 points

Dancing On Ice returned for another year on Sunday evening with an ultra-glamorous launch – as Joey Essex kicked off the show with his dance partner Vanessa Bauer.

The former TOWIE star, 32, certainly started things off with a bang as he took to the ice in a suave two-piece suit and even swung his partner in an airplane lift as they bagged 27 points out of a possible 40.

After months of romance rumours between the pair, they took the chemistry to the ice as Joey could be seen dubbing his partner ‘Easy on the eye’ and admitting that there would be ‘some flirting’. 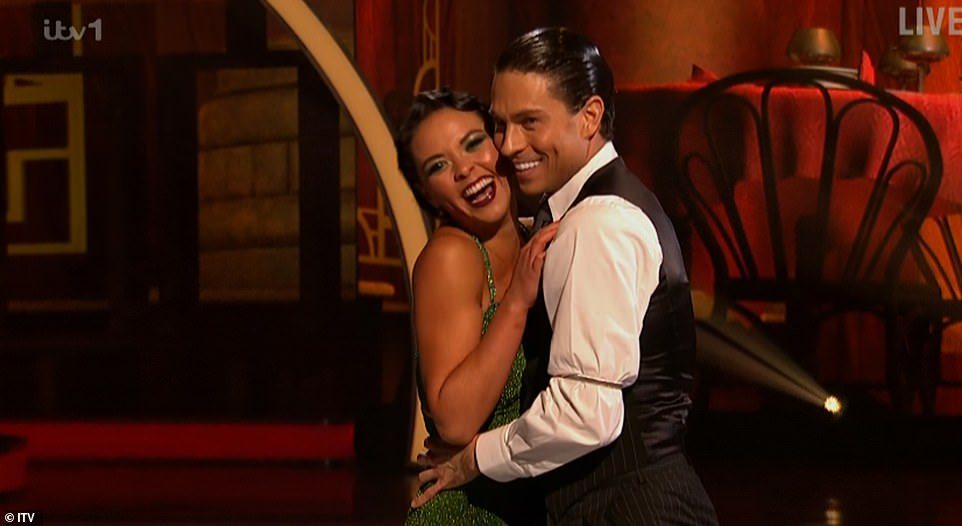 Dancing On Ice 2023: The only way is… up! Joey Essex and Vanessa Bauer brought their off-screen chemistry to the rink as former TOWIE star opened the new series with an impressive 27 points

It came after the show began with an show-stopped opening performance from the professional skaters as they stormed the ice in neon ensembles while dancing to Whitney Houston’s I Wanna Dance With Somebody – before being joined by the 11 new celebrities for a grand finish.

Presenting duo Phillip Schofield and Holly Willoughby returned to the rink too as the show’s hosts, as the latter looked sensational in a black diamanté embellished gown.

Joey’s opening performance impressed the judges as he stepped out with glamorous partner Vanessa – who looked gorgeous in a glimmering green mini dress.

Judges Jayne Torvil and Chris Dean both scored him 6.5 points, with the latter saying: ‘Tonight I think you stole some hearts, that was a great performance. A few things to be careful of, be careful that you have got to skate up to Vanessa, don’t let her pull you around.’

While he scored a 7 from both Oti Mabuse and Ashley Banjo, with Oti dubbing the reality star: ‘Charming’. 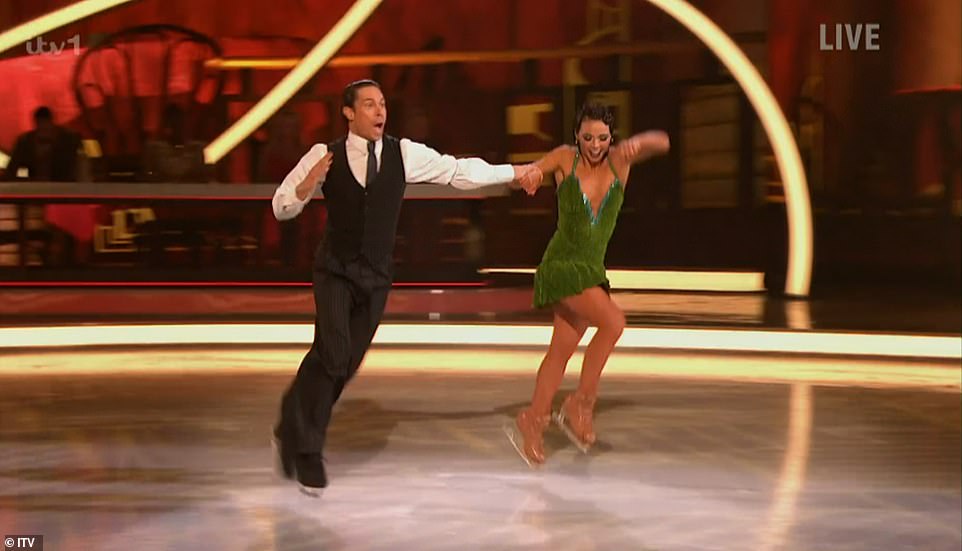 Suave: The former TOWIE star, 32, certainly started things off with a bang as he took to the ice in a suave two-piece suit 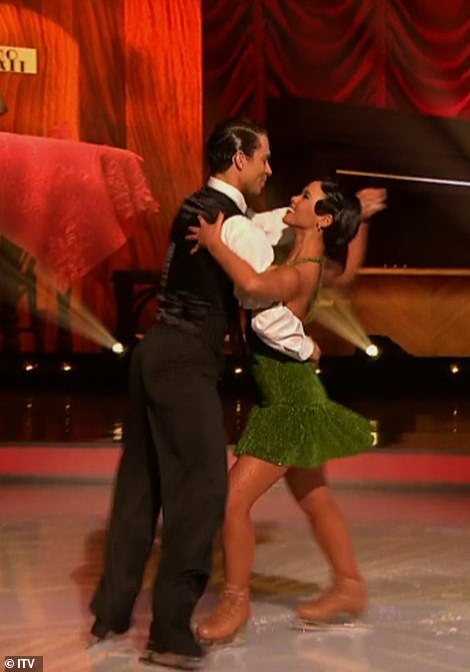 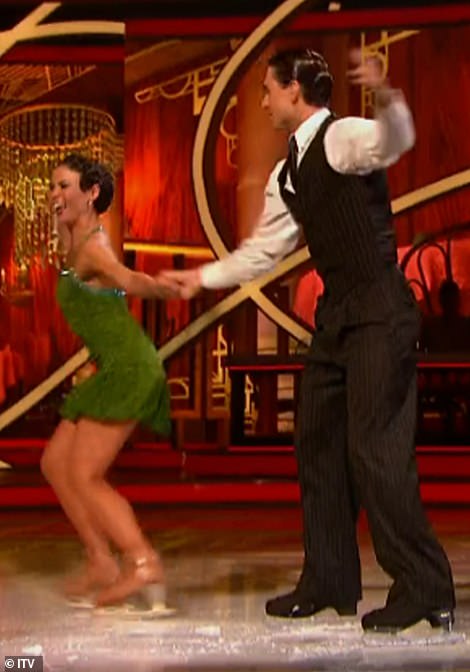 Show-stopper: Joey’s opening performance impressed the judges as he stepped out with glamorous partner Vanessa – who looked gorgeous in a glimmering green mini dress

6. Michelle Heaton and Lukasz Rozycki: 19 out of 40 points

Before the performance, the show gave viewers a glimpse into Joey and Vanessa’s prep towards the first week and showed the moment they began training.

But the reality star didn’t just have his eye on the prize, as he also liked the look of his partner.

Upon meeting, he said of Vanessa: ‘She’s easy on the eye, ain’t she? Vanessa is single, I’m single. There’s gonna be a bit of flirting going on.’

Next to the ice was EastEnders legend Patsy Palmer and her partner Matt Evers, who successfully managed a collection of well-executed lifts, but struggled to remember all of her moves.

The soap star scored 21 points out of 40 as Ashley and Oti both gave her a score of 5, While Jayne and Chris both went for 5.5. 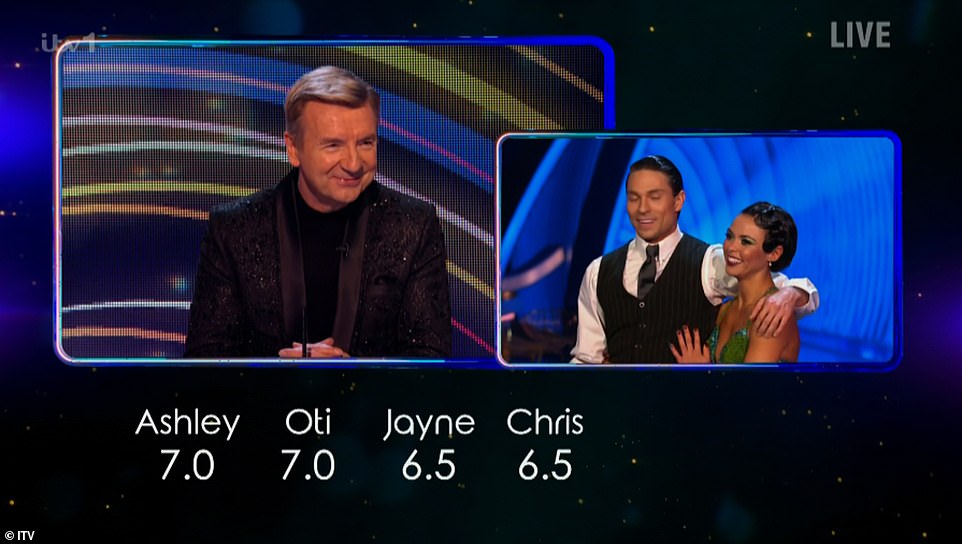 Not a bad start! Joey bagged a total of 27 points out of 40 from the judges 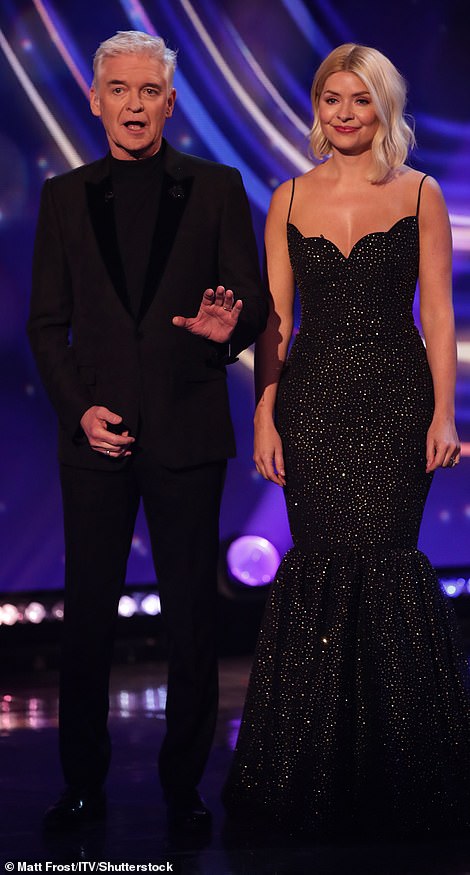 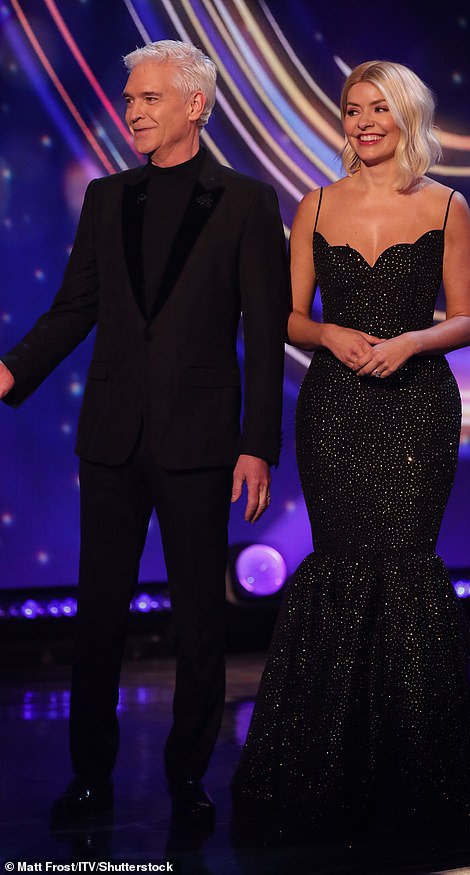 They’re back! Hosts Phillip Schofield and Holly Willoughby returned to the rink too as the show’s hosts 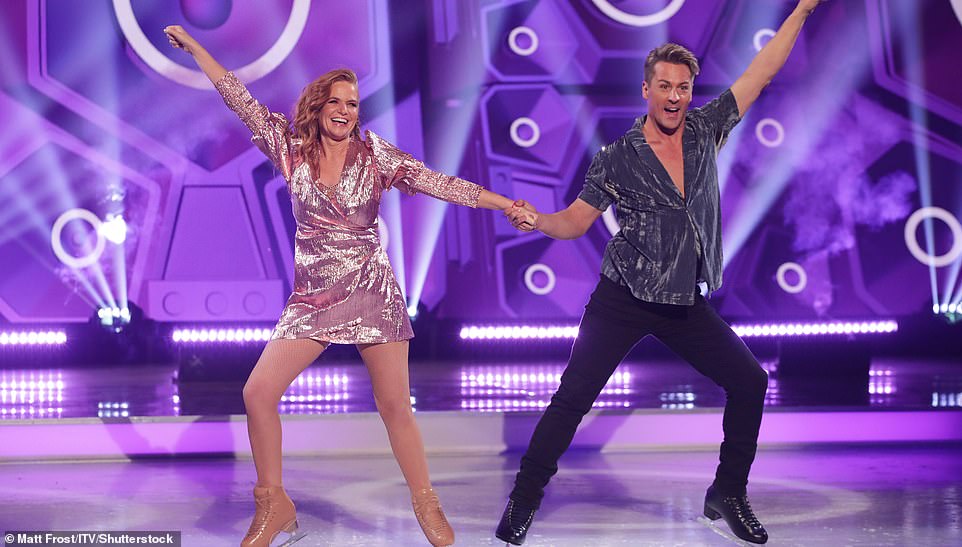 Second to the stage: Next to the ice was EastEnders legend Patsy Palmer and her partner Matt Evers 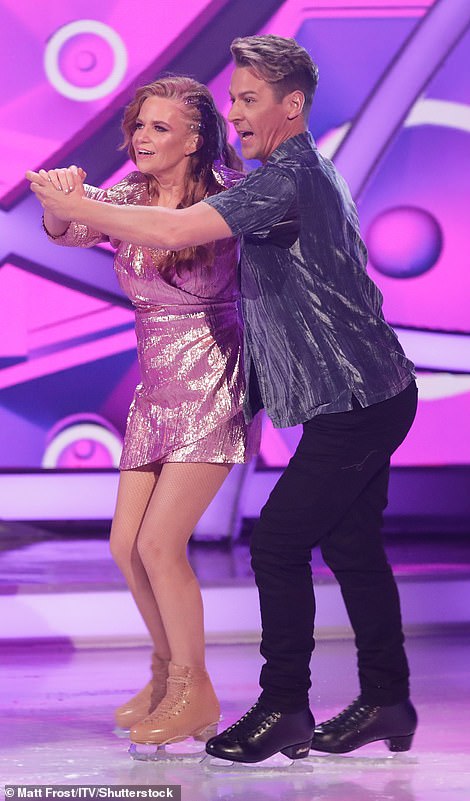 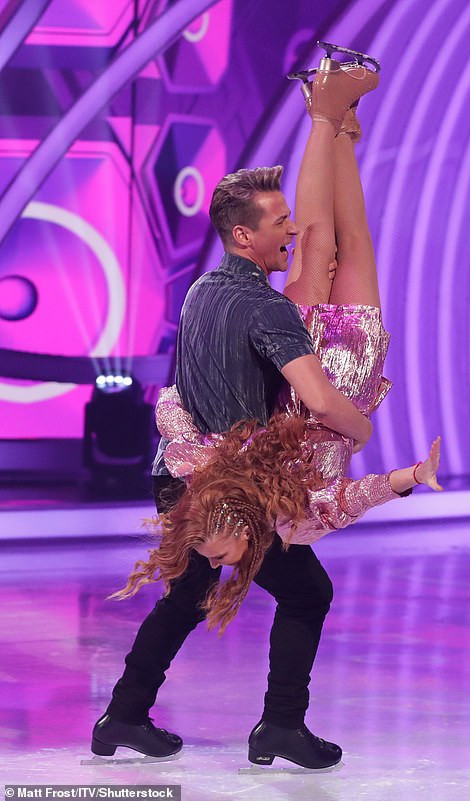 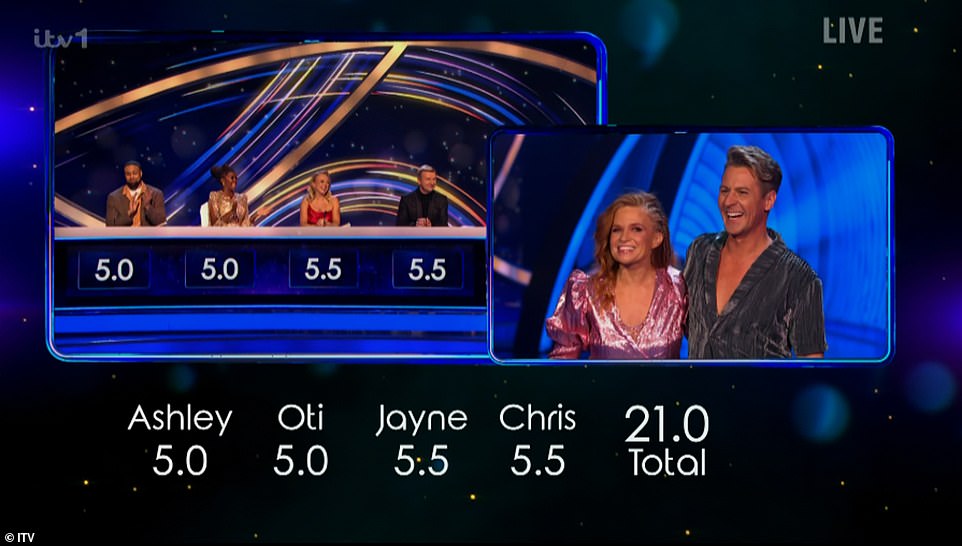 Over half: The soap star scored 21 points out of 40 as Ashley and Oti both gave her a score of 5, While Jayne and Chris both went for 5.5

‘It’s week one and I love you. You have something you can’t teach, the vibe, the energy. You did look terrified at points but that will come with time so just keep going,’ said Ashley.

While Chris noted that she did forget some steps, but was guided by partner Matt to help out.

The Wanted’s Siva Kaneswaran was next up with his partner Klabera Komini, as the pop star heartbreakingly revealed that his late bandmate Tom Parker inspired him to do the show. 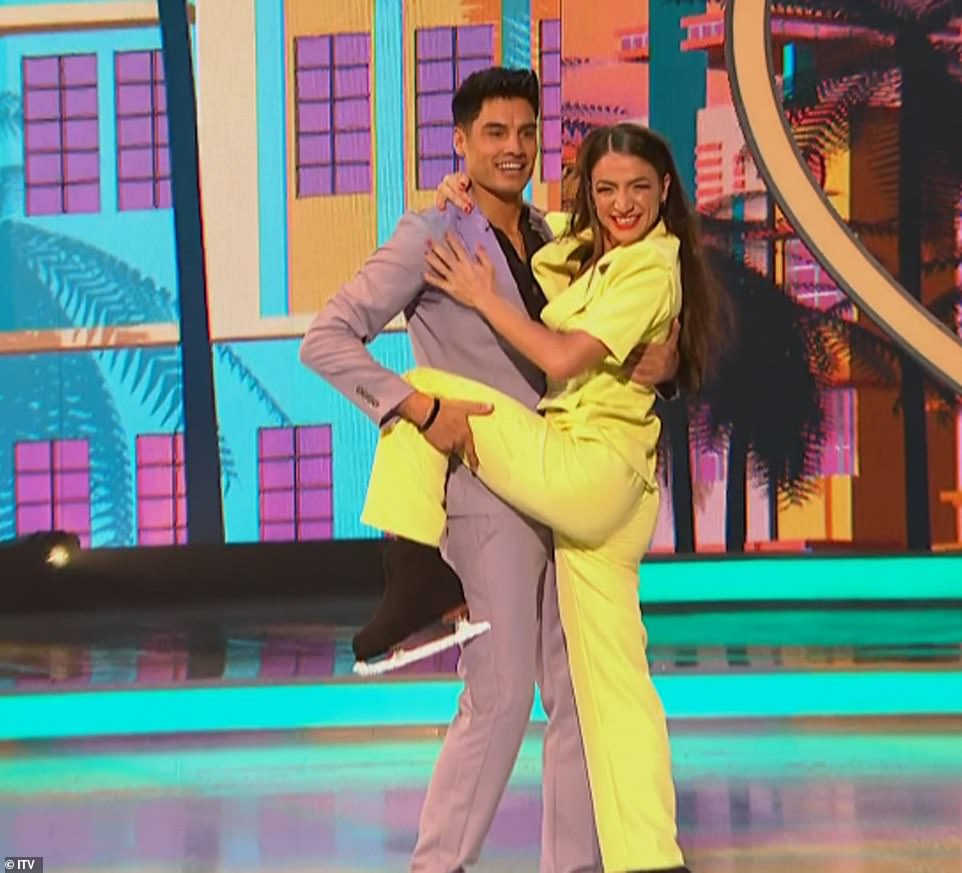 Bright: The Wanted’s Siva Kaneswaran was next up with his partner Klabera Komini as they donned matching bright suits 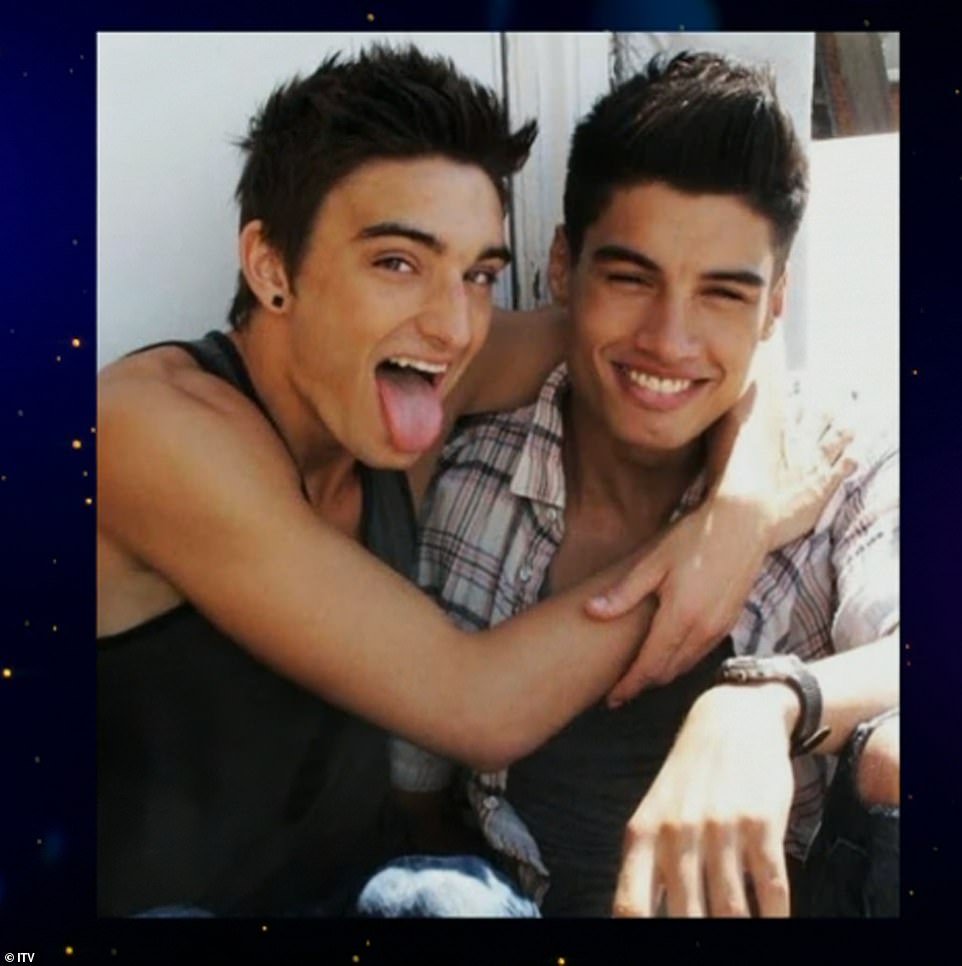 Grief: The pop star heartbreakingly revealed that his former bandmate Tom Parker inspired him to do the show and admitted that he was ‘still grieving’

Tom passed away in 2022 from a brain tumour, with Siva sharing on the show that he was ‘still grieving’, but wanted to use some of the ‘fight’ that he saw from his late friend to try something new.

He and Klabera came out with a vibrant performance in bright suits as they pulled off an impressive performance to Duran Duran’s Her Name Is Rio.

Described as a ‘solid performance’ from all four judges, Siva received scores of 6 across the board – totalling to 24 out of 40.

A happy Jayne told the singer: ‘I think you have a lot to bring to the competition’.

Ekin-Su Culculoglu was the third celebrity to perform live on the ice, and admitted during practice at Alexandra Palace that she was extremely nervous and ‘has no idea how to skate’. 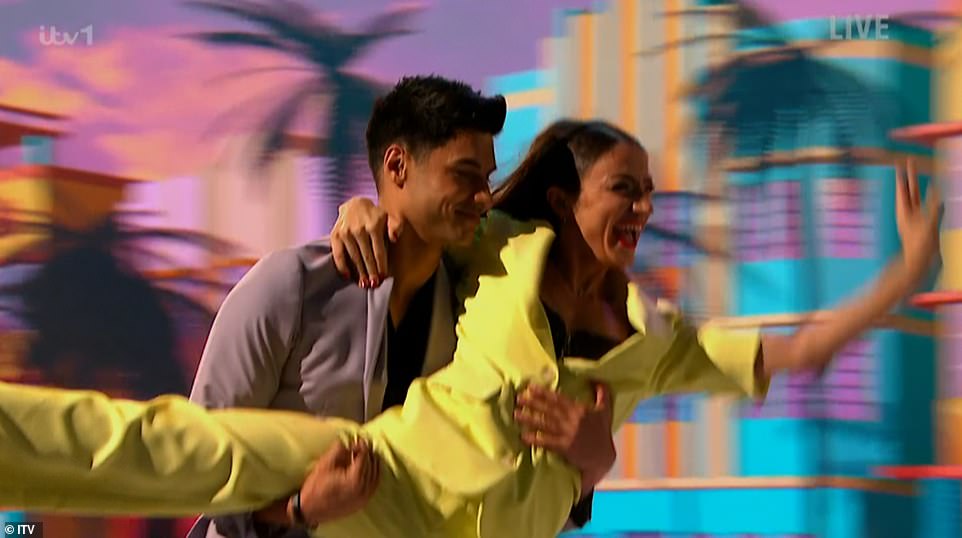 Confident: He and Klabera came out with a vibrant performance in bright suits as they pulled off an impressive performance to Duran Duran’s Her Name Is Rio

‘Every time I fall I worry that i’ve lost a tooth, I’ve hurt my leg or something. I’m really, really nervous’ she said.

Performing to Britney Spears’ Toxic, the Love Island star looked sensational in a shimmering unitard number as she was typically animated for the debut.

She wasn’t shy to get on her hands and knees and crawl across the ice during the performance, pulling a slew of facial expressions while dancing with partner Brendan Hatfield.

Her boyfriend and fellow Love Island winner was in the audience to cheer Ekin-Su on too as the crowd cheered for her. 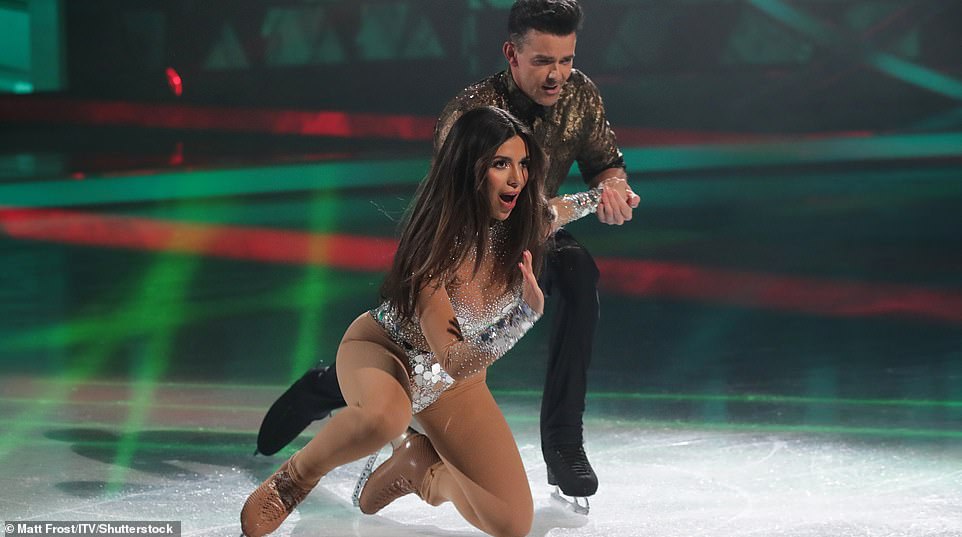 Up next: Ekin-Su Culculoglu was the third celebrity to perform live on the ice, and admitted during practice at Alexandra Palace that she was extremely nervous and ‘has no idea how to skate’ 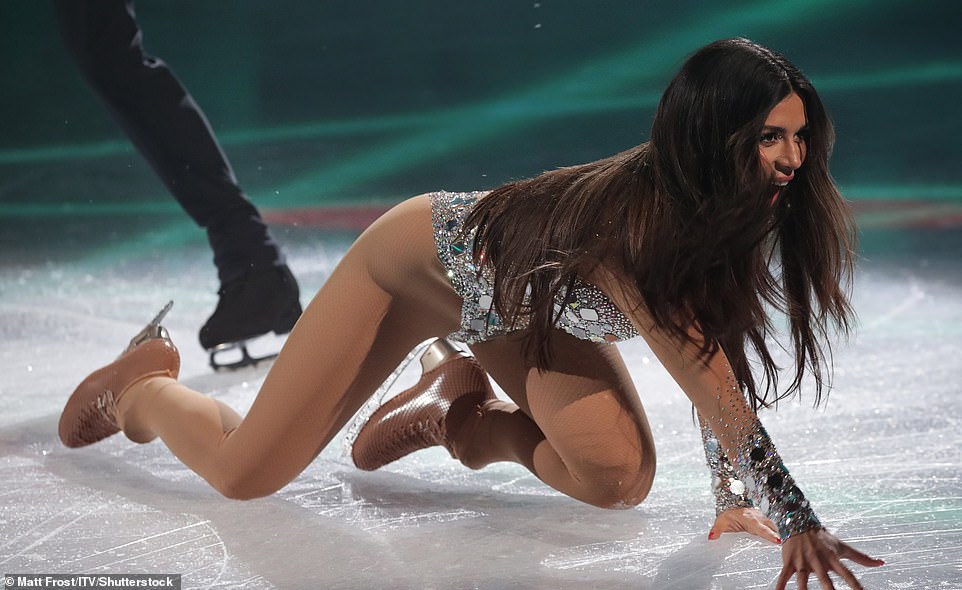 Extra; She wasn’t shy to get on her hands and knees and crawl across the ice during the performance, pulling a slew of facial expressions while dancing with partner Brendan Hatfield

The performance was certainly a hit with her beau Davide, who said he ‘couldn’t wait’ to take her home after the show, adding: ‘I love seeing her dance on the ice, it was like she was flying’.

While she certainly had the star power and the confidence, the judges did have some critical feedback for Ekin-Su as they asked for some more focus on technique.

After giving the highest score, Oti kicked things off by saying: ‘I loved it, I thought it was hot, hot, hot.rom the outfit to the hair to the makeup. You are a performer and it’s hard to train that. If you work on the quality and the training then you will go far.’

‘It was very sexy. But what I want more of is the skating,’ shared Jayne. Ashley was in agreement as he said: ‘Skate on your own without holding on to Brendan, show us what you can do.’ 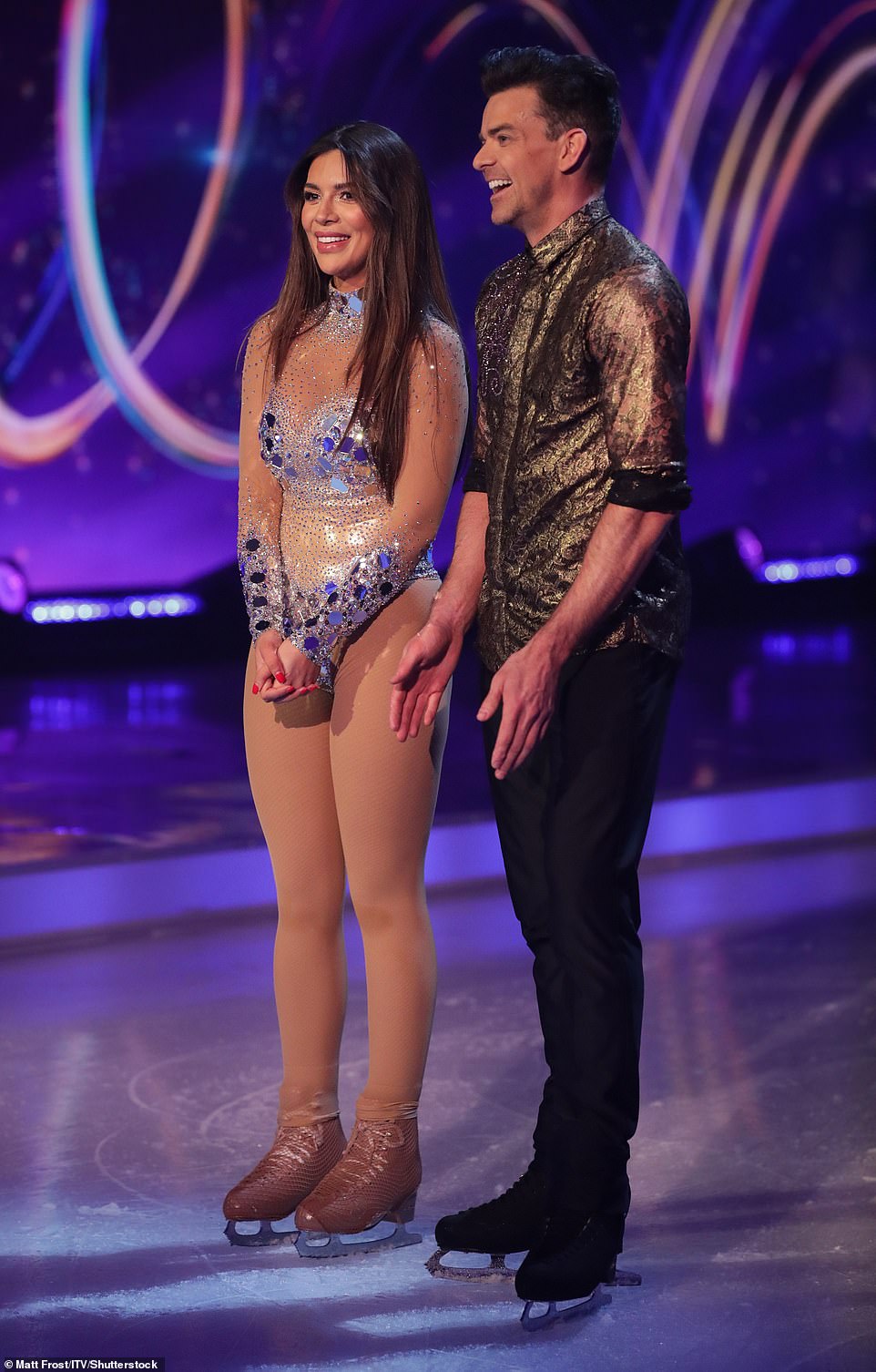 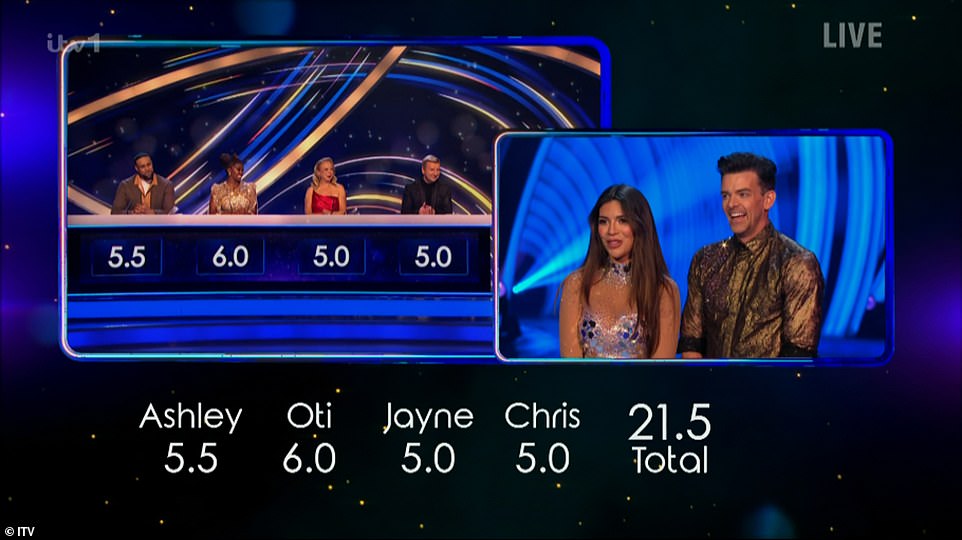 While Chris rounded things of: ‘If you didn’t have the skates on it would be a 10, but it is a skating show. So i want to see more of relying less on Brendan.’

Liberty X’s Michelle Heaton, 43, then made her debut on the ice – looking incredible in a bright pink mini dress with a ruffled hem as she joined partner Lukasz Rozycki.

Before the performance, she could be seen explaining how much the show meant to her, telling the camera: ‘My struggle with addiction is no secret. A few years ago I was up for Dancing On Ice and I was just in no fit state to do it. Yeah, it’s been a lot. So yeah, it’s really surreal to be here.’

The dance featured a large range of lifts but saw some mis-steps from Michelle as nerves got the better of her, leaving the popstar to lean on her partner more.

After scoring 19 points from the judges, she began to get upset and began to tear up as she turned to her partner and said: ‘It’s just amazing and he’s just been amazing. I’m so sorry.’

But she was reassured by hosts Holly and Phil, who assured the star that it was a ‘good place to start’.

Olympic gymnast Nile Wilson was last but not least with his partner Olivia Smart, who is also making her debut on the show as a professional.

Recalling having to quit gymnastics due to a neck injury, Nile explained before the performance: ‘That’s been difficult to cope with, for 20 years I had real purpose and suddenly it’s gone. This has been really good, it’s good to be competing again.

Nile blew the audience away with a stunning performance as he and Olivia took to the ice in matching red ensembles – putting his gymnast skills to good use as he attempted a bold butterfly jump alone.

And it’s no wonder they took to the top of the leaderboard with 29.5 points out of 40, bagging a 7.5 score from every judge except Ashley, who scored him 7.

Chris dubbed the performance ‘fantastic’, while Oti said: ‘You are so, so special. What you did was so enjoyable to watch.’

‘We’ve had some increible performances already but sometimes I had to remind myself: “Are we in week one?”, that felt like we were watching much further on,’ added Ashley.

DANCING ON ICE 2023: MEET THE CONTESTANTS

WHAT DID THEY SAY?:  ‘I’ve turned it down before because I was terrified, but when I turned 50 I made a pact to get out of my confront zone. ‘

WHAT DID THEY SAY?:  ‘I’ve got some amazing news to tell you. I’m so excited, I can’t wait to get myself on the ice and skate. Stay tuned and see you on the ice.’

WHAT DID THEY SAY?: ‘I’ve not got the best coordination so when people find out they will laugh, but I don’t want to spend my life saying “I can’t do this, I can’t do that.”

WHAT DID THEY SAY?: ‘I’m so excited. I wanted something in my life with structure and it’s more serious than what I usually do.’

WHAT DID THEY SAY?: ‘I’m so excited that I get to learn how to dance…on ice! I’m terrified but can’t wait – I just want to make the most of this whole experience.’

WHAT DID THEY SAY?: ‘I want to learn how to skate and make my family proud of me and put on a show for everyone to see.’

WHAT DID THEY SAY?:  ‘I am definitely in it to win it.And this may be one of the scariest things I’ve ever signed up for but I couldn’t be more ready for the challenge!’

WHAT DID THEY SAY?: ‘I’ve not done much ice-skating but I am so excited for the opportunity. I’m so excited to get into that routine and to feel like an athlete again.’

JAMES LEE WILLIAM AKA THE VIVIENNE

WHAT DID THEY SAY?: ‘To be the first drag artist to take part in one of the big UK reality competition shows is an honour and a big step forward for queer representation on TV.’

WHAT DID THEY SAY?: ‘I’ve got giant feet, I don’t skate and I can’t dance. My family has already made bets – they’re making bets that I’ll fall on the first episode!’

WHAT DID THEY SAY?: ‘I’ve always wanted to do it but I know I would never have been able to complete anything because of the way I was 18 months ago, so I’m really truly grateful that I’ve got it this year when I’m a lot stronger.’